The Baltim South West field is estimated at over 28 billion cubic meters of gas. The review takes place as a result of the perforation of the Baltim South West 2X delineation well, performed immediately after the success of the Baltim South West 1X discovery well.The reservoir, located in 25 meters of water, is located in the conventional waters of the Nile Delta 12 kilometers from the coast of Egypt and only 10 kilometers from the production field of Nooros, discovered in July 2015.With this new well, the gas potential of the so-called “Great Nooros Area” rises to around 86 billion cubic meters of gas in place. Of these, about 58 belong to the Nooros field, while the remainder to the new independent discovery of Baltim South West. The license is operated by Petrobel, a joint venture between IEOC and the Egyptian state company Egyptian General Petroleum Corporation (EGPC).

ICP Foundry is part of the Project. 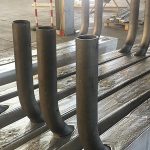